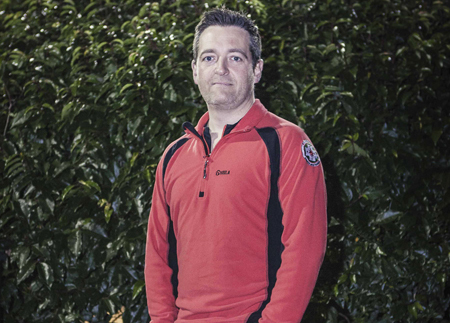 Simon Lane has been member of the Cheshire SAR team – which celebrated its 10th Anniversary this year – since 2011, and held a number of roles on the Executive Committee before being voted in as Team Leader in 2013. Together with a management team of six other individuals (Chairman, two Deputy Team Leaders, Secretary, Training Lead and Treasurer), he looks after the team’s administration and planning out of their Knutsford town Centre base in Red Cow Yard.

The offices are now also an invaluable base for CSAR’s training and medical teams. The office space was kindly donated by Monckton Properties, part of the Tatton Estate, Management 18-months ago, when the Brooks family became aware of the fact that CSAR were about to lose their Warrington base and risked being homeless.

Mr Randle Brooks explained: “We heard that Cheshire Search and Rescue were about to lose their base and did not want to see the amazing work the do put at risk in any way. We could not think of a better local charity to support by not only donating them space but bringing them into the centre of Knutsford to help them gain the profile the deserve. We were delighted therefore that the Mayor also made them her 2013-14 Charity.”

Simon responded saying: “It’s made a massive difference to our operations. Team members’ live in all areas of Cheshire and previously we had to search for pubs or make shared use of a portacabin in Warrington to hold our meetings. Now we have an allocated ‘home’ until we can afford to rent one or, ideally, achieve our dream of purpose building a centre. The £10,000 donation both last year and this year from Monckton helps us save more money to put into the Charity.”

“Having a dedicated space helps us to focus on planning and preparation and we’ve already seen the benefit as our training courses have changed for the better. It also gives us greater visibility in the heart of Cheshire and we’ve become far more involved in local events.” Simon went on to explain more about the charity.

“CSAR was originally formed following the disappearance of a teenage girl, and began as a group of community spirited individuals with little more than high visibility jackets and torches.

“Our primary function is to search for missing people, but we also get involved in evidence searches, body recovery, winter weather cover (assisting the Police and Ambulance Service), and are fully equipped to respond in a flood situation. We attend 40-50 call outs in a typical year.

“We’d seen the team mature to a useful point around three years ago, but then had to make a decision about whether to continue offering the same great support, or to develop the team and expand our skill base to provide even better assistance to Cheshire Police and the other statutory emergency services who we work with.

Once that decision was made, we’ve been able to provide more in depth and specific training which, together with the dedication of members, means that CSAR has gone from strength to strength.

This inevitably means the time managing operations has increased. Simon and his brother Rick (Deputy Team Leader) own their own property business and tend to split the duties 50/50 and turn on the answerphone to cover times of absence.

“It’s rapidly becoming a full-time job, and now I’m immersed almost 100% in the charity managing operations along with our Chairman, Robbie Davies MBE and the rest of the management team” continued Simon.

“All of the Cheshire SAR equipment and vehicles are based at TA barracks in Widnes, Warrington, for which we pay rent.

“CSAR is a registered charity and no-one in the team is paid, in fact we pay monthly subs to keep the team going. With no government funding, we are heavily reliant on the goodwill of local people donating to keep us running. All team members donate a minimum of one and a half days a month (on top of other activities) to help raise funds, and it costs over £30,000 just to keep us on the road and ready to deploy 24/7.

“We’ve taken a conscious decision to upgrade our training, kit and therefore capability in recent years and the result is that we have one of the most highly qualified teams in the country – something we are extremely proud of.

“We do have two grand old ladies, in the form of two 4×4 Landrover Defender ambulances, but they are reaching the end of their useful life and we really need to change these at some point, as one is one aged 23 and the other 26! We also have a van to mobilise the kit and equipment, and a control vehicle, a 15-year-old former Police riot van, to run the search GPS radio, screens, which increases the probability of finding missing people.

Our Patron is His Grace, the Duke of Westminster, who agreed to become Patron after one of the team wrote and asked whether Cheshire SAR was something he would be interested in supporting. The Duke has attended three training sessions so far and is delighted to have seen the team develop over the years. Most recently he visited to meet the team members and watch demonstrations of the current operational capability.

“We were also grateful to receive a grant of £1,750 from Knutsford Council which we have used to purchase high spec helmets with built in visors for eye protection – they’re brilliant!

Cheshire SAR is mainly called out to assist in the search for missing or vulnerable people across the county’s 904 square miles. Cheshire has large areas of moorland, dense forests along with steep ground, cliffs and quarries, which means the team needs to train for more than searches in the ‘Cheshire Plains’.

Simon smiled as he explained: “We do receive some ribbing from other search teams for being based in lowland area, but search training in water and exposed areas is crucial. In reality many of our members spend their weekends in the Lakes or North Wales and there are no rules on what kind of terrain someone can go missing in. We have also have three trainee search dogs, two who ‘air scent’ and one ‘trailing’ all of whom are amazing to watch and work with.

“Today we find the police seek out our help more and more, sending us to newer and more challenging environments. However, they do give up their free time to help with training, as do all the other professions. We also have trained paramedics and other Health Care Professionals in the team; even a Greater Manchester search-trained policewoman, who gives up her free time. It’s addictive once you start.

“We have spent the last two years improving our work with neighbouring teams – after all, 40 people searching are better than 20, and it provides a great opportunity to build relationships and learn from each other continually. We train regularly with these teams too and while there is some skill overlap, we are known as search specialist.”

As Simon says, this work is addictive and they have no problem attracting and retaining volunteers, and currently have a waiting list. But does the addictive nature of the work impact on family life for the team?

“Our families always come first,” Simon said fervently, “they are extremely understanding and very supportive, but know they are our priority – somehow the combination of the two just works, which is great for everyone.”

To discover more about the work of Cheshire Search and Rescue and get in touch, please visit their website cheshire-sarteam.org

To enjoy images of the team through the eyes of professional photographer and team member, Johnathan Clover, along with those of the Brooks family having fun during their ‘rescue’ demonstration at the Cheshire Game Fair just visit our Flickr site here.